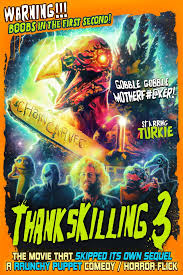 A few years ago, a little independent horror film came out called, THANKSKILLING.  The movie starred a hilarious talking turkey puppet named, well, Turkie.   The film was  a lot of fun and got quite the cult following.  It was just a matter of time before we got a sequel, but now Turkie is back in THANKSKILLING 3!   Here is the basic plot of the film from the movie's imdb.com page:

Fowl-mouthed villain Turkie carves through the likes of a rapping grandma, a mindless puppet, a wig-wearing inventor, a bisexual space worm, and their equally ridiculous friends on his quest to recover the last copy of "ThanksKilling 2".
So you might be asking, well what happened to THANKSKILLING 2?   Well, that's a valid question, but the answer there is no THANKSKILLING 2!  This is the first movie to skip it's own sequel!  Ha! That just shows you right there the kind of humor you are in for when you watch this movie.  I must admit, this film is not for everyone.  Even though it's a remarkably bigger budget than the first film, the film is still a low-budget film and it shows.  That being said, this is one of those movies that proves you do not need a huge budget to make a fun, entertaining film.

The film is probably more comedy than horror, but it does have horror aspects throughout the film.  One of my favorite things about the THANKSKILLING movies is how they give nods to other horror films.  This film had a hilarious homage to the EVIL DEAD films that literally made me laugh out loud!

If you want a fun film that you can just sit back and watch without having to think about it at all, this is the film for you.   THANKSKILLING 3 is available now on DVD from MVD Entertainment and contains the following special features: