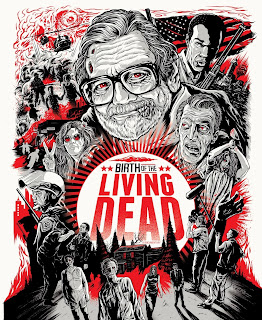 One of my all time favorite horror movies is George A. Romero's 1968 film, NIGHT OF THE LIVING DEAD.   It is the film that is considered the first real zombie film, and we have it to thank for every zombie film that has come since.  We would not have THE WALKING DEAD if it weren't for NIGHT OF THE LIVING DEAD!  The movie is a true classic and still holds up today, over 40 years since it was made!  There is a new documentary about this legendary film coming out called BIRTH OF THE LIVING DEAD.  Here is the basic synopsis of this new documentary:


In 1968 a young college drop-out named George A. Romero directed “Night of the Living Dead,” a low budget horror film that shocked the world, became an icon of the counterculture, and spawned a zombie industry worth billions of dollars that continues to this day.
“Birth of the Living Dead,” a new documentary, shows how Romero gathered an unlikely team of Pittsburghers — policemen, iron workers, teachers, ad-men, housewives and a roller-rink owner — to shoot, with a revolutionary guerrilla, run-and-gun style, his seminal film. During that process Romero and his team created an entirely new and horribly chilling monster – one that was undead and feasted upon human flesh.
This new documentary also immerses audiences into the singular time in which “Night” was shot.  Archival footage of the horrors of Vietnam and racial violence at home combined with iconic music from the 60s invites viewers to experience how Romero’s tumultuous film reflected this period in American history.  “Birth of the Living Dead” shows us how this young filmmaker created a world-renowned horror film that was also a profound insight into how our society really works.

BIRTH OF THE DEAD is screening now at select locations, and the film is scheduled to be released on DVD January 7, 2014.