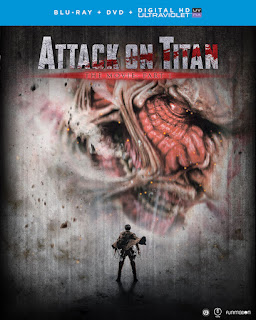 I'll be honest, I don't know why this movie is not getting more accolades than it is.  I honestly haven't seen too many people discussing this one in the Facebook horror groups I am in, but they definitely should be!   The film is ATTACK ON TITAN and it is easily one of the best films I have seen this year.   Here is the basic plot synopsis courtesy of the Funimation website:

When the Titans first attacked, life for mankind was forever changed. Fearing the massive man-eating humanoids, survivors constructed three enormous walls for protection. From that point on, humanity lived safely behind the walls for the time being. A century later, life is peaceful. Eren and his friends live inside the walls, yearning to explore beyond the borders they've always known. But the opportunity comes sooner than expected when a Colossal Titan appears above the wall. With a single kick the barricade is pierced, allowing a swarm of titans to pour in and devour their newly exposed prey. Witnessing the devastation, Eren and his friends vow to destroy the man-eating terrors. The future looks bleak, but there's more to Eren than meets the eye: he may be humanity's last hope against extinction.

The first thing I wondered about this was if I'd enjoy it having not read any of the original manga that it is based on.  Well, the answer is a definite YES, so don't worry if you don't know anything about the ATTACK ON TITAN story.  I didn't know anything about it at all, and it did not keep me from liking this film one bit.

The film is shot beautifully, with some amazing cinematography and a wonderful blending of the practical and CGI effects. The Titan's are all CG, obviously, but they look great and are done extremely well.   The film is extremely entertaining with almost no slow parts at all.  It doesn't take long for the action to start with the arrival of the colossal Titan, and it never slows down from there.   The first part of the film feels like a GODZILLA type monster movie as the Titans destroy the village by stomping and pounding the buildings, and eating the townfolk.   Later the film turns into an all out bloodbath as a group of soldiers goes out to take on the Titans, who can only be killed by lopping off the skin at the base of their necks.

I honestly don't have anything negative to say about this film.  It was a fun film that has really made me want to go check out the original graphic novel and the animated series.   While more of an sci-fi action than a horror film, it still had tons of gore that even the biggest horror fan will appreciate and enjoy!

ATTACK ON TITAN:  PART 1 is available now on DVD and Blu-ray from Funimation.