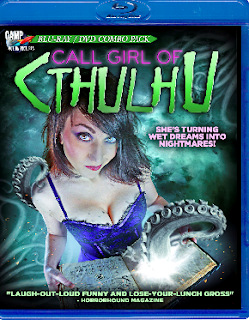 You jut never know what you are going to get with low budget, independent horror films. Some can be really good, while others...actually the majority can be really bad.  I had no idea what to expect from CALL GIRL OF CTHULHU, but I am happy to report that this film is a hidden gem among low budget horror films!  Here is the basic plot from the Alternative Cinema website:

From the makers of WNUF HALLOWEEN SPECIAL comes the goriest, most hilarious H.P. Lovecraft tribute to ever splatter the screen.
Carter Wilcox (David Phillip Carollo) is a struggling artist who’s been saving his virginity for someone special. When he meets the enchanting escort Riley Whatley (Melissa O'Brien), he believes he’s found the one. Unfortunately, she’s also "someone special" to an ancient cult that believes she is the chosen bride of its alien god, Cthulhu.  Forced to mate with the tentacled deity, Riley becomes a vessel for the spawn that will destroy mankind.
Now, Carter and his noise musician roommate, Erica Zann (Nicolette le Faye), must battle the sinister cult and unimaginable creatures to save Riley... and the rest of humanity.
Will they save the world or surrender to the slimy grip of the Great Old Ones?

One of the first things I noticed about this film was that it looked like a much higher budget movie than I think it actually was.   That, and the acting was much better overall than most films of this caliber.   There was also a great mix of comedy and horror, something that is hard to get right in films like this.

The best thing about this film in my opinion, are all the great and gruesome special effects throughout the film.  The best part about them is that they are almost all practical effects, something that is extremely rare in low budget horror movies these days.  These is something about practical effects that CGI just will never be able to duplicate.  You can definitely tell the difference on screen, and that makes for an overall better movie in my opinion.

This is a crazy flick for sure, full of crazy body modifications and gore, somewhat reminiscent of a Troma originally film, except it looks like a much better quality film than most Troma films.  If you like that crazy type of film, though, you should love CALL GIRL OF CTHULHU.  I highly recommend it!

CALL GIRL OF CTHULHU  is available now as a BD/DVD combo pack and contains the following special features: