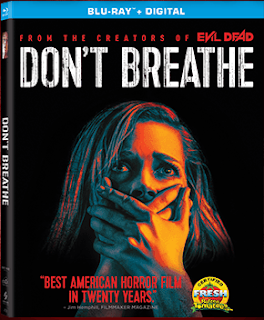 I'm going to start by saying this is by far one of my favorite horror films of 2016.   DON'T BREATHE looked amazing from the trailer, but I never got a chance to see it in the theater.  I finally had the chance to check out the Blu-ray and I am really mad I didn't see this one in the theater.  What a great film, full of suspense that would have been amazing on the big screen with 7.0 surround sound.  The film was still super suspenseful and enjoyable watching at home, though.  Here is the basic plot from Sony Pictures website:

From the twisted minds behind EVIL DEAD comes a new terrifying experience. Three young thieves (Jane Levy, Dylan Minnette, Daniel Zovatto) fight for their lives after breaking into the home of a blind man (Stephen Lang) who has a dark side.

Ok, seems like a very simple plot, but there is so much more to the movie than this plot tells you.  It is pretty simple at first as the 3 kids try to pull of the robbery of the blind man, a Military Vet that not take kindly to people coming in to take his money.   While he is blind, he has a heightened since of hearing that makes it easier than you think for the man to track the burglars inside his home, hence the title DON'T BREATHE, as even the slightest sound of a breath could tip the man off as to their whereabouts.

While you think the kids would have the advantage over the blind man, you find out very quickly that is not the case, as he knows his way around the house better than anyone, especially when he trips the breaker box and puts them all in complete blackness.  This immediately puts the kids at an extreme disadvantage.

Now my immediate instinct when I was watching this film was to ask why the man doesn't call the police as soon as he knows they are in his house?  Well, that is soon answered with a shocking revelation that the kids stumble upon while in the man's basement looking for a way out.    I won't say much more as to not give anything away, but you immediately see why the man would not want any law enforcement to come anywhere near his home!

DON'T BREATHE is a must see for all horror fans in my opinion.  It is available now on DVD, BD, and Digital Download and contains the following special features: