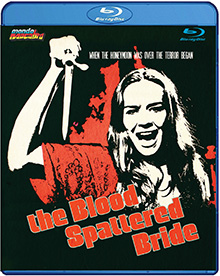 I always look forward to new releases from Mondo Macabro.   They release some of the best, and lesser known horror films from all over the world.   THE BLOOD SPATTERED BRIDE is one of their films that is a little more well known, I believe.  I actually saw this movie years ago, but I didn't remember much about it at all.   Here is the basic plot of the film from the CAV website:

Susan, a young bride, travels with her husband to his family’s ancient manor house in the far north of Spain. Susan is a virgin and is very hesitant about her husband's sexual demands. She is also disturbed by her unfamiliar surroundings and wonders if she will ever come to terms with her new married life. She is shocked to discover that all the old portraits of female members of her husband’s family have been locked away in the basement. When she finds them, she discovers that one of the portraits shows a woman holding a strange dagger. The woman’s face has been cut out of the painting. Her name is Mircala Karstein.

Overall, this is a great classic 70's shocker.   The film is a little slow in parts, and I feel at 102 minutes, it could have been trimmed down some to help with the film's pacing.   That is a very small complaint, though, as the film is great overall.   With a name like THE BLOOD SPATTERED BRIDE, you would expect lots of blood, and the film does not disappoint when it comes to that.   There are some very brutal and bloody scenes, one in particular being a prolonged stabbing scene with copious amounts of spurting blood!  There are also a lot of beautiful and atmospheric scenes, comparable to a some of the vampire films of Jean Rollin.

THE BLOOD SPATTERED BRIDE is available now on Blu-ray from Mondo Macabro and CAV Distribution.  The Blu-ray contains the following special features: