Check out the trailer for the upcoming film, GAME NIGHT 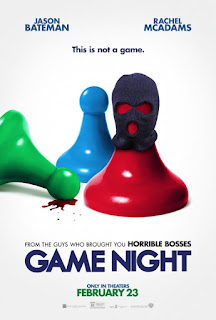 If you haven't seen a trailer for this film yet, be sure to check it out asap!   The film is called GAME NIGHT, and while not really horror, it looks frightening enough to be worthy of a mention on the 4H blog!   IMDB.com lists it as an Action/Crime/Comedy, but based on the premise it looks to be a very dark comedy.  I have to admit, though, this trailer is hilarious!    Here is the basic plot from the film's official website:

Bateman and McAdams star as Max and Annie, whose weekly couples game night gets kicked up a notch when Max’s charismatic brother, Brooks, arranges a murder mystery party, complete with fake thugs and faux federal agents. So, when Brooks gets kidnapped, it’s all part of the game…right? But as the six uber-competitive gamers set out to solve the case and win, they begin to discover that neither this “game”—nor Brooks—are what they seem to be.

Check out the trailers and let me know what you think!


Game night will be in theaters starting February 23.