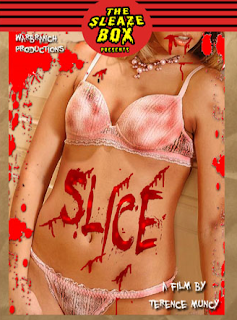 SLICE
Directed by Terence Muncy
Distributed by  The Sleaze Box

The folks at The Sleaze Box bring you another low budget, gritty horror film with SLICE.  The plot is fairly simple....some girls all get together for a costume party and are basically killed off one by one by a deranged lunatic.

That might sound simple enough, but there is a nice plot twist in the film that I didn't see coming.  Also, the ending is not what I expected at all, but I can't say too much about it or I will ruin the shock!

Like all of the films in the Sleaze Box library, this film is extremely bloody and full of great gore.  As always with these films, all of the gore is done with practical effects.   This is a huge reason I am a fan of these movies.  Practical effects are far superior to CG effects in every way.

The killer in this film is super creepy and quite terrifying, especially when he is wearing his creepy skull/skin mask.  The film is paced well and clocks in right at 1 hour, so there is not a lot of wasted time on this film.  We get to the kills pretty quickly and it never lets up!   You can tell this film was made by some people who love the horror genre!

SLICE is available now on DVD from www.thesleazebox.com and contains the following special features: