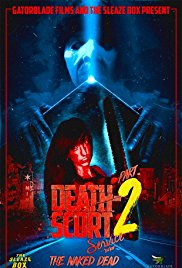 A couple of years ago I had the privilege of reviewing an indi horror film called DEATH-SCORT SERVICE.  You can read that review HERE.   The film was from a company called The Sleaze Box and from that name, you should know what's in store for you when you put in one of their DVDs!

The Sleaze Box is now back with  DEATH-SCORT SERVICE PART 2:  THE NAKED DEAD, and unlike some sequels, this was just as fun of a film as the first one.   Here is the basic plot of the film per the film's imdb.com page:

Deep in the heart of Las Vegas a new killer has emerged. Having survived the previous psycho's last wrath (Michelle) Krystal "Pixie" Adams is left behind to start anew and forget about her black past. Problem is this new murderer is unstoppable!!. A new group of up and coming hookers are on the streets left to pick up the pieces and start fresh. Will they survive, or will they become prey to this maniac slasher!

Like the first film, if you are a looking for a plot driven,  smart, stylish, big-budget horror film, you might want to keep looking.   But, if you are like a lot of horror fans and just want to put in a fun dvd full of all the things that make horror great, then this is the movie for you!    DEATH-SCORT SERVICE PART 2 if chock full of great kills with some amazing gore!  Add in plenty of sex and nudity and you get a classic grindhouse experience that you just don't see too much of these days.   Another note about the gore and special effects, all is done with practical effects which is definitely something worth mentioning, as most films today go the cheaper route of CGI, which I think we can all agree never looks nearly as good as the real thing!

If you were a fan of the first film, or any of the other films from The Sleaze Box, you will love DEATH-SCORT SERVICE PART 2!

DEATH-SCORT SERVICE PART 2 is available now on Blu-ray and DVD from The Sleaze Box.  The DVD includes autographed cover art and a CD soundtrack!  Special features include trailers and deleted scenes.