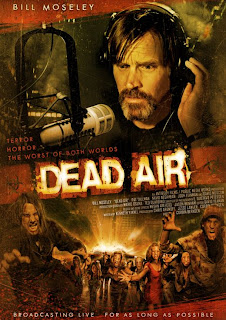 When I first saw the cover for DEAD AIR, I immediately thought of my buddy Scott’s review of Pontypool, from back in April. The covers are similar, as are the write-ups about each movie on the backs of the cases. This instantly put me on guard with an air of skepticism; Pontypool was released a full year before Dead Air. Could director Corbin Bernsen have ripped off a movie idea?
Thankfully, he did not…well, very much, anyway. The overall premise is similar, but these two movies are drastically different in execution. Likewise, both are entertaining and definite ‘musts’ for fans of the zombie genre.
Here is the basic plot courtesy of imdb.com:

“Logan Burnhardt is the ego-king of the airwaves, but his unflappable persona is put to the test when a terrorist bio-attack unleashes a plague of flesh-ripping maniacs on Los Angeles.”

The film is released by Anthem Pictures and the main star of the film is the great Bill Moseley, who I got to meet last month at the Texas Frightmare Weekend. Moseley is most renowned for his roles as the sadistic Otis from House of 1000 Corpses and The Devil’s Rejects, and the freakish Chop-Top Sawyer from The Texas Chainsaw Massacre 2. The character of Burnhardt is a long trek away from either of these two previous horror icons, taking on a more heroic role in the movie as opposed to a butchering one.

Dead Air has a well thought out plot that includes an insightful look into the concept of bio-terrorism and how it could very well topple the United States as a super-power. The acting is excellent, with Moseley and leading-lady Patricia Tallman playing off of each other perfectly. Tallman is certainly no stranger to horror either, with titles like MONKEY SHINES, the 1990 remake of NIGHT OF THE LIVING DEAD, and ARMY OF DARKNESS on her resume (yes, folks, she was the possessed witch in Army of Darkness!).

The description of the plot above is very brief and does not delve very deeply into the underlying themes of the film, which include loyalty, patriotism, and duty. But those themes do nothing to bog down the film in any way. The film flows along at an even pace, building suspense and tension as it goes.

The special effects are also well done, although my only complaint about this film is that there are only a couple of good gore shots. And when I say a couple, I mean literally, there are only two. How can you have a zombie flick without gore? It’s just unheard of!

But Dead Air is definitely entertaining and fun to watch. The characters are likable and believable and the production value is top-notch. The film does not really break new ground as far as zombie lore and the genre goes, but it is definitely worth watching.

CLICK HERE to watch the trailer for DEAD AIR