I would give anything for this to be a real reality show.... 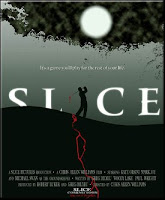 Check out this fake commercial for a fake Fox reality show called, So You Wanna Be My Zombie. It was created by the filmmakers of the upcoming independent Horror film, SLICE, as a promotional piece used to show investors in order to raise money for production of the film. SLICE will be directed by Chris Allen Williams and is in the financing stages now. Visit the official SLICE website to learn about investment opportunities for this film. Hopefully we will get to see SLICE on dvd someday, but until then check out this very creative investor commercial, where loosing a challenge doesn't just get you kicked off an island, but it results in death!!