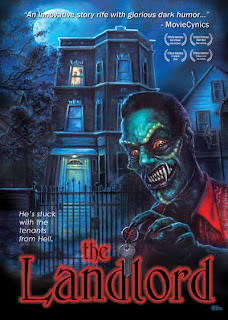 And you thought your apartment building was bad! Wait until you watch THE LANDLORD, from Massive Ego Productions. You will never complain about broken air conditioners or leaking faucets again after seeing what these tenants go through....at least you don't have to deal with demons living in your apartment trying to eat you! THE LANDLORD was written and directed by Emil Hyde. Here is the basic plot synopsis from imdb.com:

The Landlord is the story of Tyler, the unfortunate young proprietor of a demon-haunted apartment building. While finding tenants has never been a problem for Tyler, keeping them alive long enough to pay rent is. No matter how nicely Tyler asks, he cannot keep the demons from eating the renters (or persuade them to wait a month or two, even). They never listen. And why should they? They have an all-you-can-eat buffet of delicious human flesh and Tyler as their pet monkey. But all that might change when Tyler takes a liking to the newest tenant, a desperate young woman running from demons of her own.
Before I go any further, let me point out this is an extremely low budget movie...shot on just $20K with a largely volunteer cast and crew. Don't expect too much from this film, and you will not be disappointed. Expect to just have fun and be entertained. Also, while the film is a Horror/Comedy, go into it realizing that it is much more of a comedy than a Horror film. Now for the good and bad. The acting in this film was something I could not get past. I have to admit it is pretty bad. That is something I noticed from the very beginning and it set a bad tone for me at the beginning. With everything else going on, you tend to forget about that though, and are able to get past it. Some of the jokes fall flat, but some are so dead on they really make the film. Once scene in particular shows a girl at a women's clinic looking to get an abortion. Before they let her make her decision, they show here a video that looks like one of those cheesy videos you would watch in school. As the narrator speaks of abortions being the same as murdering your newborn baby, we see a sweet young mother pull out a butcher knife and start stabbing her newborn baby she was holding in her arms. As I type this, I realize that the stabbing of infants does not sound like a topic that would normally invoke humor, but the way it is done here, well, you just cant help but laugh!
One more thing I have to mention is the great DVD cover art. It reminds me of a great older VHS box from the 80's. If only the film were as good as the box art makes it look, we would really have something special. But, keep in mind this was the director's first film ever....which is pretty impressive. If this is what he did with his first film, I look forward to seeing his future films and improvements within.