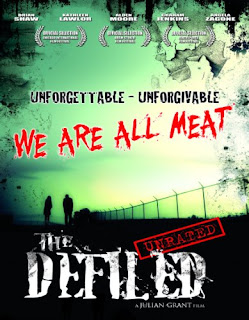 THE DEFILED
Written and Directed by:  Julian Grant
Distributed by:  Chemical Burn Entertainment

It is so refreshing to run across a horror movie that brings something new to the genre. THE DEFILED

caught me by surprise on many levels and never once did it disappoint. What's more, the film brings a new concept into the zombie genre, which is one of my favorite sub-categories of film. What more can you ask for?  If you're not familiar with The Defiled, here is the plot from the film's official website:

In a post apocalyptic world, science and technology have backfired leaving unfathomable destruction and a permanently diseased planet in its wake. A virus is mutating the human race turning innocent survivors into mindless cannibals. In a savage future world devoid of hope, a man infected with the deadly viral disease must cope with the burden of a new born son, ensuring his survival. Though he is infected, he does not allow his growing desire for human flesh to overcome his responsibility to the newborn. Along the road, traveling from town to town, he saves an unaffected woman from a certain death by facing down her perpetrators. Ultimately she joins him on his odyssey, a journey through hell on earth in search of a safe haven in which they can perhaps start a life together, both becoming committed to doing whatever it takes to make sure the child survives.

As I mentioned, this film never let me down. Although the initial premise might sound a tad familiar, this is NOT something you've seen before...I can almost guarantee it. But not just because of the story; the whole film is an excellent testament to what you can accomplish with willpower and a little bit of talent.

First and foremost, the cinematography in this film is brilliant. For being a low budget production, I am amazed at how well this film is shot. I love a moving camera and THE DEFILED does not disappoint. There are many panning shots as well as quite a bit of crane and dolly work as well. This constant movement really helped to immerse me in the film.

In addition, the acting is stellar as well...even though there is no dialogue in the film. Brian Shaw does an amazing job as the lead character, the zombie that is trying to protect it's newborn son, as does Kathleen Lawlor, the human that eventually takes up with Shaw's character. Both actors convey every emotion with superb clarity, without saying a thing. This is a true testament to the talent levels of these individuals. I would imagine there are several A-listers in Hollywood that would not have done as good of a job in these roles.

The uniqueness of THE DEFILED's plot is a major selling-point for me. I can honestly say that I've never even considered something like zombie sex or child-birth before, but this film hits on both points. And it kinda makes sense, if you think about it. I mean, zombies are basically reanimated humans, right? And if you take a human being down to its primal level, you are left with animalistic tendencies. So why not things like sex and child-birth? It might sound implausible now, but think about it for a bit and you might be surprised.

I even enjoy the black-and-white aspect of the film as well. I think it works very well to help set a dark tone and even add to the sense of overhanging menace. Heck, even the gore looked good in black-and-white, partially because of the vivid sound effects that accompany it.

I give THE DEFILED four stars out of four. It looks great visually and it entertains immensely. But it goes past that as well. It makes you think, makes you question everything about the zombie genre that we've seen so far. And it definitely leaves you with a specific emotion at the end (no spoilers here, folks). Check this one out for sure.