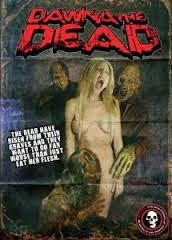 Eveningside cemetery rests over one of the 6 gates to hell. Dawna, a girl who can't let go of her dead boyfriend visits his grave every chance she gets, and the night of the big party is no exception. but what she doesn't know is that tonight the gate will open.

The term "plot" is saying a lot, as there really is not much to the movie in terms of the plot.  Basically zombies rise from the grave and have sex with all the girls that came to the cemetery for a party.  Apparently zombies have physical needs too...who knew?  In terms of a zombie movie, it is actually very well done considering I'm sure it had a minuscule budget.  The zombie effects look really good, even though some of the zombies are just masks that the actors wear.  The film is done in a very cool style, made to look like an older film from the 70's or 80's, complete with film scratches and flaw marks and even old creepy 80's style music that fits the film perfectly.   I actually really enjoyed the zombie part of this film, unfortunately, the sex scenes make up the majority of the film.

While most adult films are meant to arouse and stimulate the viewer, this one was made more to just shock the audience.   At least, I think (and hope) it was.  I can't imagine there are people out there that are genuinely aroused by the sight of a rotting zombie having sex with a woman, complete with nasty slime and green zombie juices! Yuck!!!  This might be the first adult film where you'll fast forward through the sex scenes to the get to the dialog parts! Ha!  It's true, I had to fast forward through most of the sex scenes in this film...they were just too gross for me.  But that is the point of this film, to disgust and shock, so the filmmakers succeeded there for sure!

It's hard to recommend this one, but if you think you've "seen it all", then you might want to check this out and I think you will find that you have not seen it all yet!  It's good for a laugh and a shock, that is for sure.    Be sure to check out the Blooper Reel in the special feature section for a good laugh as well.