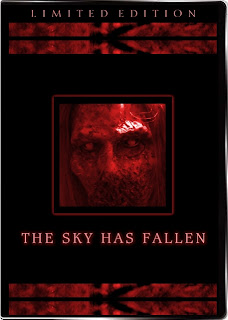 THE SKY HAS FALLEN
Written & Directed by Doug Roos

Everyone knows I love a good zombie movie...big budget, low budget, it doesn't really matter.  If it's got zombies in it, I'm gonna watch it and I am probably going to like it.  I have seen very few zombie movies in my life I have not enjoyed.   Some of you may remember a post I did back in 2010 about a short film called THE SKY HAS FALLEN.   Writer/Director Doug
Roos put the film on DVD and made a kickstarter.com campaign to raise money in order to fund a full length feature zombie film. Well,  here we are years later and the full film is complete and ready to purchase on DVD!  For those not familiar with this film, here is the basic plot from the film's imdb.com page:

Within a couple of hours, a new disease wipes out almost all of mankind. Trying to avoid infection, people flee to remote locations, but they start seeing mysterious black figures, carrying away the dead and experimenting on them. Now, Lance and Rachel, two survivors determined to fight back, must kill the leader of these creatures before the rest of humanity disappears.

This film is very simple, as there are only 2 characters in the film (not counting the endless number of zombies).  Unfortunately, I thought these 2 characters were the weakest part of the film.  The acting is very amateur at best, with the lines being read in a very monotone manner during most of the line delivery.  But, as I have said before with zombie movies, we are not here for the acting, we are here for the zombies, and this movie has plenty of them.  The makeup effects on the zombies are very well done and the gore is very plentiful here. One thing to note here is that all of the effects are practical effects, there was no CGI used in this film.

One of the most unique parts about this DVD, is it is also an instructional make up/effects video in addition to a regular movie! In addition to 6 Behind the Scenes featurettes, this DVD also includes a step-by-step mask making video and a step-by-step Prosthetic Application video.  This makes an excellent resource for any new filmmaker out there!

THE SKY HAS FALLEN DVD is on sale right now for only $5.99 for a limited time, so get your copy today!


CLICK HERE to visit the film's official website and purchase the DVD
Posted by ZOMBIE HAYES at 12:08 AM