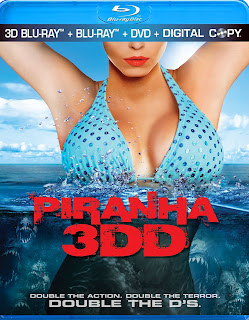 I heard nothing but bad things about this film after it was released.  I never got a chance to see it, as it never came to a theater around me.  I loved the first PIRANHA 3D (2010), it was a lot of fun and the 3D in the theater was great, so I was really looking forward to this film.   After hearing so many negative things about this film, I never bothered with it when it came "on-demand".   But....as much as I liked the first one, I knew I would eventually watch it, and I am actually glad I did.   Now don't get me wrong, the movie is not great by any means, but it was fun and kept me entertained, even if part of the entertainment was laughing at how dumb some of the parts were.   I know that is a weird mix of a good review and bad review, but that is how I felt about the film.  Confused yet?  Well before I go any further, here is the plot of the film from the Anchor Bay website:

Prepare for double the action, double the terror and double the D’s. The prehistoric school of bloodthirsty piranhas are back and this time, no one is safe from the flesh-eating fish as they sink their razor sharp teeth into the visitors of summer’s best attraction, The Big Wet Water Park.

Ok, so the film isn't close to being as good as the 2010 predecessor, but it is still a fun film overall.  The acting is pretty bad for the most part, and the story line is a little silly.  The idea of a piranhas invading a water park sounded like it could have been a great concept if done right.

Like PIRANHA 3D, the film started off with the appearance and then quick killing off of a major star.  In the first one we got Richard Dryfuss.  In this one, we get Gary Busey.  I guess that should have told me something from the beginning!  Christopher Lloyd reprises his mad-scientist type role which was pretty funny, but I wish he would have been in more than just a couple of scenes. Ving Rhames reprises his role as well, although it is just one scene's worth and is a more comedic scene than the first film.  Truthfully, it was a comedic scene that was ok, but just didn't really work for me.
One high point was David Koechner as Chet, the owner of the water park.  David Koechner is one of my favorite character actors.  He steals pretty much any scene he is in no mater what film or TV show he is on.  I love that guy.   Oh, and I can't leave out David Hasselhoff!  His scenes are actually pretty funny and probably the highlight of the film.  Yes, I just said David Hasselhoff was the highlight of a film.   That might say a lot about the film right there!  Ha!!

So, the film is not great by any means, but it has it's moments and like I said, it kept me entertained.  I have a feeling that since I had heard how bad it was, my expectations for it were extremely low, so that probably helped.  If you liked the first one, give this one a shot.

PIRANHA 3DD will be released on September 4th on DVD and a 3D Blu-ray/Blu-ray/DVD/Digital Copy combo pack.