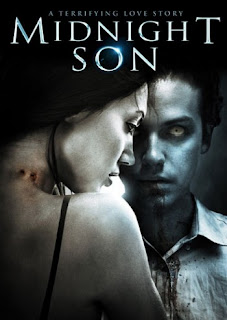 I have a feeling there are a lot of people out there who have probably never heard of MIDNIGHT SON.  Hopefully that will change as the word spreads about how good this film is.   The cover describes this film as "A terrifying love story", and that couldn't be more true.  Don't let that "love story" part scare you away, this is no TWILIGHT type love story....not by a long shot.   For those unfamiliar with this film, here is the basic plot from the Image Entertainment website:

MIDNIGHT SON is the story of Jacob, a young man confined to a life of isolation, due to a rare skin disorder that prevents him from being exposed to sunlight. His world opens up when he meets Mary, a local bartender, and falls in love. Tragically, Jacob's actions become increasingly bizarre as he struggles to cope with the effects of his worsening condition. Forced by the disease to drink human blood for sustenance, he must control his increasingly violent tendencies as local law enforcement narrow their focus on him as a suspect in a series of grisly murders.

I have admitted on many occasions that I have never been a big vampire fan...zombie are more my thing.   I have seen a few movies over the past few years that are making me rethink that, most recently the films LET THE RIGHT ONE IN and the American remake, LET ME IN.  You can now add MIDNIGHT SON to that list of films that is slowly turning me into a vampire fan.

I actually did a post about this film back in November of 2010.  I posted the trailer and said how good this film looks like it was going to be.  Unlike a lot of films that don't live up to their great trailers, MIDNIGHT SON was even better than the trailer made it look.  I was blown away by this film. I expected it to be good based on the awesome trailer, but was not expecting to be as good as it was.

Everything about this film was great.  The acting was superb, without a weak player in the group.   The gore effects were very well done and plentiful, which is always a good thing.   The film was paced perfectly without there ever being a dry spell or long drawn out scene.   I haven't been so pleasantly surprised by a movie in a long time.  This is one you will want to check out for sure. Whether you are a fan of vampire films or not, I think most all horror fans will enjoy this one.

MIDNIGHT SON is available now on DVD and contains the following special features: