Do you know the story of The Dibbuk Box? 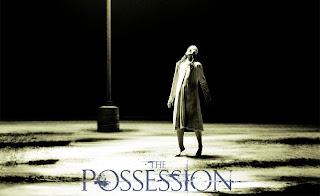 A lot of you have probably seen the trailer for the new film coming out called, THE POSSESSION.  The movie is being produced by Sam Raimi's Ghosthouse Pictures, and looks to be an amazing film.   What is even more amazing, is that the film is based on actual events and an  actual "haunted" box called The Dibbuk Box  (Dibbuk is a Jewish term for a restless spirit or demon).  A lot of movies say "Based on a True Story", but this one actually is and has years of history behind it.  Clark Collis from Entertainment Weekly Magazine did a wonderful write up of the new film and some of the history behind The Dibbuk Box  (see issue# 1218, Aug. 3, 2012).   Apparently the box has brought nothing buy bad things to anyone who has owned the box.

The box was listed on ebay a few years ago and the seller tells the entire story of the box on the ebay auction description.  Check out the great Entertainment Weekly article or read the ebay auction page to learn about this cursed box.  There are some amazing things that have happened to those in ownership of the box, which makes me wonder why so many people actually placed bids on this item when it was up for sale.

CLICK HERE to visit the official website of The Dibbuk Box
Posted by ZOMBIE HAYES at 9:41 PM