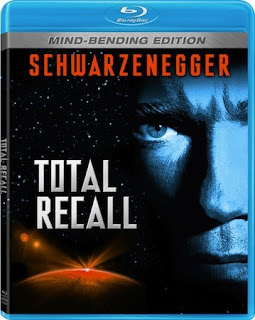 I now it's not officially a Horror film, ok it's not anywhere near a Horror film, but TOTAL RECALL is one of my favorite Science Fiction films of all time, and like most Science-Fiction films, they seem to all contain one, if not more, horror elements to them.  I would think most Science-Fiction fans would have seen this movie by now, or at least know about it, but for those that don't, here is the description of the new Blu-ray version courtesy of the Lionsgate website:

Experience TOTAL RECALL the way it was meant to be seen with a pristine Director approved 1080P HD transfer! Action star extraordinaire Arnold Schwarzenegger is perfectly cast as Quaid, a 2084 construction worker haunted by dreams of Mars in this crowd-pleasing science fiction spectacle. Against the wishes of his sexy blonde wife (Sharon Stone), Quaid goes to Rekall, a company that implants artificial memories, so he can "remember" visiting the red planet that is now being settled by human inhabitants. However, Quaid is actually a secret agent from Mars – of is he?

As I mentioned, I'm sure most people have already seen this film, so I don't think a typical "movie review" of this film is needed.  Basically it boils down to this...if you haven't seen it, do so asap.  Now I will admit the movie has aged a bit since it's original release in 1990, but the effects still hold up well enough to be entertaining and the alien woman with 3 breasts is still as hot (and disturbing) as ever!  Ha!

This new Blu-ray version is the way to go for sure when watching TOTAL RECALL.  The 1080P High Definition picture looks amazing.  One of the special features included on the Blu-ray is a Restoration Comparison which is very interesting.  It's amazing the difference this film is in HD.

The TOTAL RECALL "Mind-Bending Edition" Blu-ray was just released on July 31st so is available now.  This is one film you will definitely want to upgrade to Blu-ray if you have the DVD version already.  The new Blu-ray contains the following Special Features: