Check out the hilarious Red Band trailer for the new zom-com, COCKNEYS VS. ZOMBIES 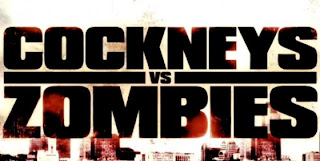 If you are a fan of SHAUN OF THE DEAD, you will definitely want to give this film a look.  The film is COCKNEYS VS. ZOMBIES and it is another U.K. zombie/comedy film.  The film is about zombies taking over London and a group of survivors holding off the zombies from taking over an old folks home.   It looks like these old folks can fight for themselves, though!  Note the awesome Walker vs. Walker scene!  Ha!  Good stuff!  Thanks to my buddy Caleb for letting me know about this one!
This film comes out in August in the U.K.....I have not seen any mention of a U.S. release, but as good as this trailer looks, I expect a U.S. distributor to pick this one up pretty quick!