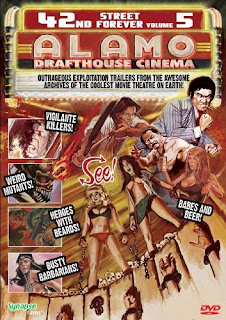 For those unfamiliar with the 42ND STREET FOREVER series, these are Dvd's filled with nothing but trailers from the Grindhouse era, when 42nd Street in New York was filled with seedy theaters that ran nothing but grimy exploitation and horror films. This series shows you trailers of these films, some of which you might be familiar with, and many that I'm sure you have never heard of. They are up to Volume 5 of the 42ND STREET FOREVER series, and I have to say that this is the weakest of the bunch in my opinion. Some trailers were so bad I had to skip them and go on to the next one. Now that is bad when I can't even sit through a minute and half to 2 minute long trailer! Volumes 1 and 2 were great with mainly horror offerings, but they have gone downhill since then. There are a few notable trailers that were definitely worth watching, like TERROR IN THE WAX MUSEUM and THE DEVIL WITHIN HER, aka. BEYOND THE DOOR. Click on those titles to watch the trailers.
If you haven't bought any of the 42ND STREET FOREVER films, I highly suggest the first two volumes...all the ones after that are pretty weak. Also, worth noting, they also released a 42ND STREET FOREVER XXX-TREME SPECIAL EDITION, full of nothing but trailers for the trashy adult x-rated films the grindhouse theaters showed along with the horror and exploitation films, so check that out if you are into that. You can purchase all the volumes from Amazon.com buy clicking on THIS LINK.
Posted by ZOMBIE HAYES at 10:22 PM