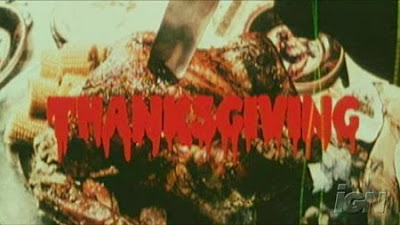 In honor of this great day, I present you the fake trailer for the movie, THANKSGIVING, created by Eli Roth (CABIN FEVER, HOSTEL I & II). For thoset that don't know, THANKSGIVING was one of the four fake trailers that played between PLANET TERROR and DEATH PROOF, in Robert Rodriguez and Quentin Tarantino's 2007 double feature film, GRINDHOUSE! The four fake trailers were created and directed by other horror movie vets, and included: MACHETE (Rodriguez), WEREWOLF WOMEN OF THE S.S. (Rob Zombie), DON'T (Edgar Wright), and THANKSGIVING (Roth). For those that missed GRINDHOUSE in the theaters, you missed a great experience. Unfortunately, the only DVD released in the U.S. split the two films and doesn't include any of the trailers except for MACHETE.
Also...on a side note, rumors have been flying since GRINDHOUSE was released that Eli Roth was going to develop THANKSGIVING into a full feature film! Well...a check on IMDB.com shows that THANKSGIVING is indeed listed on Eli Roth's page as being "In Development, so we might get to see a full film one of these days!! In the meantime, enjoy this great trailer: