MUST WATCH!! NIGHT OF THE DEMONS remake trailer 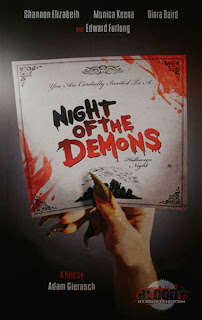 One of my favorite Horror films from the 80's was Kevin Tenney's NIGHT OF THE DEMONS, about a group of teens that go to a Halloween party in an abandoned funeral parlor. While doing a seance, they awaken evil spirits that take over the teens one by one, turning them into vicious demons. The original starred fan fave Linnea Quigley as Suzanne. Well, 21 years later, we have a remake of this Horror classic! The film stars Bobbi Sue Luther (LAID TO REST) in the roll of Suzanne now, and also stars screen vets, Edward Furlong and Shannon Elizabeth. Also...watch for a cameo by Linnea Quigley herself!! Check out the trailer below, I think this looks to be one of the better remakes we have seen in a while. What do you think?