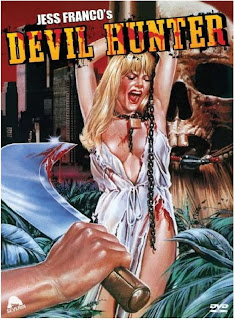 Wow...when will I learn. Director Jess Franco is considered a cult director, kinda like Italy's version of Ed Wood. Except Ed Wood's films were so bad that they are at least fun to watch. Jess Franco's films are so bad they just really suck. Known as SEXO CANIBAL in it's native Italy, THE DEVIL HUNTER as it is known here in the U.S. came out in 1980 and was Franco's answer to the jungle/cannibal genre that was so popular at the time, in the likes of films such as CANNIBAL HOLOCAUST and CANNIBAL FEROX. Here is the basic plot of this suckfest known as THE DEVIL HUNTER:
A Vietnam veteran heads to an island inhabited by cannibals to save a kidnapped model not only from her kidnappers, but also from the cannibals' lurking Devil God.
Speaking of the "lurking Devil God"..that sounds pretty cool...but all it is a big African American man with crazy red bug eyes who walks around buck naked and fights people. Here is a pic...I will spare you the full body shot! 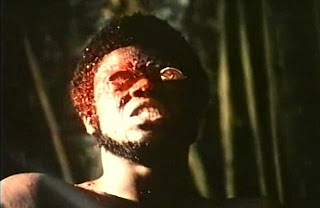 While Franco does have some good films (mainly his zombie movies), this is definitely not one of them. I highly suggest you don't bother with this film unless you have 102 minutes to kill and there is no paint drying on any wall in near proximity to you .
Posted by ZOMBIE HAYES at 6:30 PM