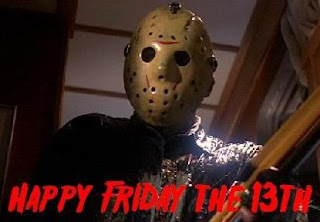 It is FRIDAY THE 13th! This really should be a national holiday! Oh well....just for fun here are some fun facts about FRIDAY THE 13th....the date and the film!!
Facts about FRIDAY THE 13th the date:
* The fear of the number 13 is called triskaidekaphobia.
* The fear of Friday the 13th is called paraskevidekatriaphobia.
* The maximum number of Friday the 13th's one year can have is 3, which occurred this year
in Feb, March, and Nov. The next time a year will have 3 Friday the 13th will be in 2015!
Facts about FRIDAY THE 13th the movie (info from imdb.com):
* Betsy Palmer said that if it were not for the fact that she was in desperate need of a new car, she would never have taken the part of Pamela Voorhees. In fact, after she read the script she called the film "a piece of shit".
* The movie was filmed at Camp Nobebosco in New Jersey. The camp is still in operation to date, and they have a wall of Friday the 13th paraphernalia to honor the fact that the movie was set there.
* The film made $39,754,601 and had a budget of $550,000.
* Victor Miller's (writer) working title for the script was "Long Night at Camp Blood".
I hope you enjoyed these fun facts! Now go watch FRIDAY THE 13th!!
Posted by ZOMBIE HAYES at 8:17 PM