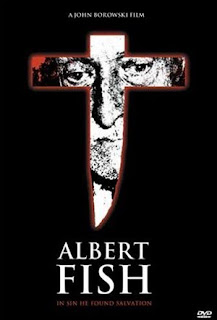 I recently got the chance to check out a film called ALBERT FISH. This is a docudrama about the famed serial killer of the same name. The film was written, produced, and directed by filmmaker John Borowski. Albert Fish was one of the most disturbed individuals you will ever encounter. If you have never heard or studied Albert Fish, I highly recommend this film, as it will tell you all you need to know about this heinous individual. Here is the basic synopsis of the film from imdb:

ALBERT FISH, the horrific true story of elderly cannibal, sadomasochist, and serial killer, who lured children to their deaths in Depression-era New York City. Distorting biblical tales, Albert Fish takes the themes of pain, torture, atonement and suffering literally as he preys on victims to torture and sacrifice. Includes interviews with artist and Odditorium owner, Joe Coleman, and true-crime author, Katherine Ramsland, Ph.D.
I have to start by saying I love movies about serial killers. I hope that doesn't sound weird, but I have always been fascinated by true crime stories, especially those involving serial killers. They are very interesting to study and it amazes me as to what some people are capable of doing. Of the few I have read books on and studied, Albert Fish was by far the most bizarre. Fish was accused of killing many people, mainly children, but the main case he is most famous for is the "kidnapping" and killing of a young girl by the name of Grace Budd in 1928. I put "kidnapping" in quotes, because he didn't actually take her, but she willingly accompanied him to what she thought was a birthday party for his niece. Her mother was reluctant at first, but her father finally convinced his wife that it was ok for little Grace to go with Albert. Needless to say there was no birthday party, and that was the last they would ever see of Grace. Albert Fish wrote a letter of confession to the Budd family. It is a very detailed and graphic letter of what he did to Grace. I can't imagine the horror her parents must have felt as they read every detail of how their little girl was killed and then what Albert Fish did to her body, including cannibalism.
John Borowski's film is the first film I have seen about Albert Fish. I have read a couple of books, but seeing the film hit me a lot harder than just written words. This film contains a good mixture of actual file film and photos, as well as reenactments. The first part of the film is a voice over of what is supposed to be Albert Fish, reading his letter that he wrote to the Budd family. Hearing these words in "Albert's" own voice is very discomforting and really makes what he did really sink in. The narrators voice in this film is very good and the film contains very good music and is shot extremely well. The film is full of details about the life of Albert Fish and tells many stories, some of which I had never heard before. One of which I found most interesting, was a story of when Albert was taking Grace to the "party". They traveled by train and as they got off the train, Grace reminded Albert that he forgot his package he had been carrying. Little Grace ran back onto the train to where they had been seated and retrieved Albert's package. Little did she know that this "package" contained an assortment of knives that would be the cause of her death within hours.
I am extremely impressed with how well this film was made. It is a brilliant look into the life and mind of one of the most troubled people in history. If you have any interest in true crime and subjects such as this, ALBERT FISH is a must have DVD.
The DVD is packed with special features including exclusive interviews, Deleted scenes, trailers, production stills, a History of the Electric Chair, and more!
CLICK HERE to watch the trailer
CLICK HERE to visit the movie's official website and to purchase the DVD
Posted by ZOMBIE HAYES at 8:25 PM