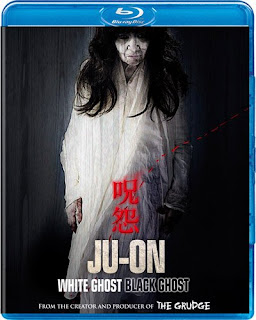 I have to be honest....I am not a big fan of ghost stories or films.  I have always been more of a slasher flick and zombie guy, so I really wasn't too excited about seeing these latest 2 JU-ON films.   I am glad to say that after watching these excellent films, that I may be coming around to the good old ghost story.  In fact, I may even go watch the original JU-ON film which I have actually never seen!  Both these films are excellent and are being distributed together on the same DVD/Blu-ray by the fine folks at Well Go USA.  Here is the plot synopsis for both films from the Well Go USA website:

JU-ON: BLACK GHOST tells the chilling story of a young woman called Fukie who discovers that she's carrying an unborn 'grudge', which vengefully curses all those around her.


Both these movies are perfect examples of what movies in this sub-genre of horror films should be.  They were both very creepy and unnerving.   JU-ON WHITE GHOST was filled with creepy imagery and visuals, and a haunting soundtrack that was as creepy as the film itself.  The film was very well made and the acting was spectacular.    The real thrill was the creepy ghost that keeps showing up....an old lady in a white night gown that causes each character to die in different and unique ways.  Check out the trailer for the scene when the ghost first appears.....I can't describe the sound she makes, but is a creepy as hell!  Watch the trailer and you will hear it.....gives me chills just thinking about it.

While I enjoyed the JU-ON WHITE GHOST immensely, and thought it to be my favorite one after watching the first part of JU-ON BLACK GHOST......eventually BLACK GHOST kicked in to high gear and never backed off.   JU-ON BLACK GHOST became my favorite of the two films, mainly due to one major scene.   The character of Fukie is carrying a cystoma, her twin sister that she absorbed while in the womb.   After years of lying dormant, the cystoma becomes active and wants to finally be out and free of Fukie.  The scene when Fukie's unborn twin sister finally makes her "appearance" is just crazy...that's the only word to describe it.

Both films clock in at just at an hour each, which I liked because there were no "filler" scenes...these films are great from start to finish and I highly recommend them for all fans of horror....even those like me that aren't big fans of ghost films.  Give this one a chance and I think you will be pleasantly surprised how good a ghost film can be! 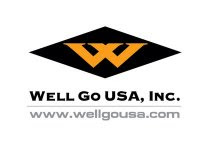