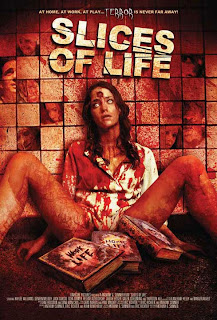 3 SLICES OF LIFE is a horror anthology made up of 3 different stories dealing with 3 aspects of a persons life, including "work life", "home life", and "sex life".
Here is the basic plot from the film's official site:


Sexual Parasites, Disembowelment, Zombies, Serial Killers, Demon Children, Violent Vixens, Rabid Office Workers and Angry Embryos all spring to life from the flesh covered sketch books featured in Anthony G. Sumner's SLICES OF LIFE. Mira (Kaylee Williams) awakens in front of a seedy roadside motel with amnesia. She searches for clues to her identity in the pages of three bound sketchbooks, in which each book represents a different aspect of everyday life, maybe her life. Convinced that the characters from these books are roaming around the motel, Mira's reality begins to crumble. Are these visions real or is she going insane? Desperate, Mira turns to the motel caretakers (Marv Blauvelt and Helene Alter-Dyche), only to discover the true evil bound in the flesh covered books and the destiny they hold for her.
At home... at work... at play... terror is never far away.
Overall, this was a fun film, although this is mainly due to the third and final section of the anthology. The first two stories were fun, but were lacking a bit in my opinion.

First of was "Work Life" with a story called, W.O.R.M. The basic plot of this segment from the imdb page says "A lowly clerk at a nano technology firm unleashes a deadly virus at the office headquarters, giving new meaning to the term corporate zombie". This story was pretty good, although a "virus" that turns people into zombies through their computers (by a shock through the mouse?) was little far fetched for me, even for a horror movie. This segment of the film does have some good gore scenes (although nothing like what you will see in the 3rd act), so that is always a plus.

The second section was about "Home Life" with story called AMBER ALERT. The basic plot of this story (again from imdb.com) states "As local girls begin to disappear, a young pregnant woman is haunted by visions of evil demonic children hell bent on stealing her unborn fetus." This was the weakest of the 3 stories in terms of plot and actual entertainment value. I won't say much about this, as I don't want to spoil anything about it (it has somewhat of a twist when the kidnapper is revealed), but I will say that it too made up for some of its plot shor comings with some really good gore and effects. The demon effects were really well done, with peoples faces instantly transforming into a twisted demon faces. This was very well done and extremely spooky at some points...especially when it is a young child that transforms into a demon.

Ok...now to the good stuff...the really good stuff. The 3rd act about the womans "Sex Life" is titled, PINK SNAPPER. Kudos to the filmmakers for that blatently obvious play on words there! HA!  This third segment was the goriest of them all.  They definitely saved the best for last here. This one reminded me of an old Frank Henenlotter film.  The film concerns a brother and sister that take refuge in a house  that looks to be owned by an old man that mistreats his daughter by locking her up in the basement.  But...he has his reasons as these two soon find out.   The daughter is possessed by some weird creature that lives inside her....um..well, privates.   The male character finds this out the hard way after being suduced by the woman, resulting in a geiser of blood!   The beast makes its way out and transfers itself to the sister that has come into the room to see what all the screaming was about.   This whole scene uses lots of blood and goo....its pretty gross stuff.   I mean that in a good way!
Overall this was a very enjoyable film that you should check out for sure...especially if you are a gore fan like me!