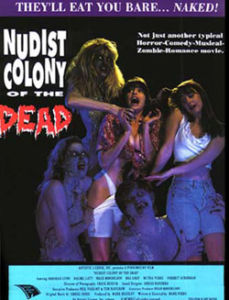 NUDIST COLONY OF THE DEAD
Written and Directed by: Mark Pirro
Distributed by:  Pirromount Pictures

I wasn't sure what to expect when I started watching this film.  I knew absolutely nothing about it and I had never even heard of it before.  I say that because I find it hard to believe.  I honestly don't know how I have never heard of this before.  Why don't I hear more about this movie?  This should be a modern day cult classic yet I don't think most people even know about it.  Before I go any further, here is the plot of the film from the film's official website:

A group of Nudists are forced to shut down their colony by a group of religious zealots. Rather than leave quietly, the nudists decide to protest by killing themselves on the site, vowing to return one day to terrorize the people who took over their land.
Five years later, a bunch of kids are sent to the ex-nudist colony, which has now been transformed into a campground for religious retreats. True to their promise, the nudist corpses rise from the grave, seeking revenge on the zealots who condemned them.

The film is a horror/comedy, but let me say that this movie is definitely more comedy than horror.  That is not a bad think at all, because the comedy here is actually really funny.  Most horror/comedy films just don't work...either the scary parts are not scary, or the funny parts just aren't that funny.  What you get here with NUDIST COLONY OF THE DEAD is a perfect mixture of the two.  In fact, this might be my new favorite horror/comedy movie!

As I stated, the comedy here is great!  Now keep in mind, the film came out in 1991, so some jokes might seem a little dated...and you will definitely laugh at some of the hair and clothes, but overall the jokes are still just as funny today.  The group of kids are traveling on a religious retreat to Camp Cutchaguzzout, built on the site of the old nudist colony.  There is a funny mix of characters here, and let me warn you, some are very politically incorrect, especially in today's times.   My favorite character was that of Juan Tu, who explains that one of his parents was Mexican and one was Japanese.  When someone asks if anyone knows how to hot wire a car, one of the female campers turns to Juan and says he must know how to hot wire a car since he's Mexican.  Juan takes offense to this and says "I'm part Japanese too, but I don't know how to bomb a harbor"!   You will find jokes like this throughout the film.  Another good example of the un-pc humor is the character of the African American Park Ranger....a character that was written with such stereotypical dialog, it is sure to set back race relations for years after seeing this (See link to clip below)! But....even though you know it's wrong, you can't help but laugh.  It is all done in fun, of course.

Aside from all the humor, there is a good horror element to the film and some really decent gore for such a low budget film.  There are some great makeup effects..including dismembered limbs, decapitated heads  (2 of which still talk!) and an incredibly well done scene of  a guy that gets cut in half at the waist, but his bottom half keeps running through the woods like nothing happened.  I have no clue how they did this effect, but it was amazing, especially considering it was done 20 years ago! The zombie effects are also pretty good...and yes, for all you guys out there, there are some nude female zombies!

I guess I can't finish a review of this film without mentioning the musical numbers.  Yes, musical numbers.  There are at least 3 or 4 in the film.  Normally this would be out of place, but in such a cheesy (and I mean that in a good way!) film as this one, they fit right in!  Luckily each one contains extremely funny lyrics, so they are all very funny to listen to.

If you are a fan of horror/comedy movies, check this one out for sure.  This film deserves a lot of credit for starting the horror/comedy trend...leading the way for movies such as the SCARY MOVIE franchise years later.  This is one you will definitely want to add to your DVD library.  The DVD comes with four bonus songs from the 1995 stage show, which were not in the original film.  Also, although the film has been remastered, it still has a low quality look to it, as the filmmakers at the time didn't have super high quality equipment.  It is not bad at all, though, and actually gives you the feel of watching an old VHS tape, giving it somewhat of a nostalgic feel.

CLICK HERE to visit the official website and purchase the DVD
CLICK HERE to see a clip from the film
Posted by ZOMBIE HAYES at 2:53 PM