This will either be the coolest movie ever....or the worst movie ever! It's MONSTER BRAWL!!!! 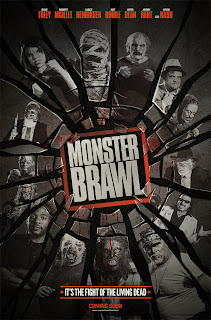 What do you get when you have a bunch of classic monsters battle it out in the ring in the middle of a cemetery?   You get a MONSTER BRAWL!!!!  Here is the basic plot from the film's official website:

Set in the tradition of a Pay-Per-View main event, comes a grotesque and hilarious fight to the death featuring a cast of eight classic combatants in all.  Along with their colorful managers, these monsters compete is visceral bloody combat in the ring to determine the most powerful monster of all time.

This could go either way.....this could be lots of fun, or it could just be awful.  Hopefully I can get my hands on a copy of this to review for you.   The cast includes actor Dave Foley, Horror film icon Lance Henriksen, and wrestling legends Kevin Nash and "The Mouth of the South" Jimmy Hart.

MONSTER BRAWL was written and directed by Jesse T. Cook and is in Post-Production now.  I will provide you with more details as they become available.   Let me know what you think about this film after watching the trailer....will this one be a winner?


CLICK HERE to visit the official website and watch the trailer
Posted by ZOMBIE HAYES at 5:40 PM