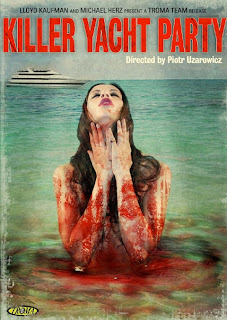 I had never heard of this film before, but when it arrived in my mailbox, I was super excited to check it out!  I mean, with a name like KILLER YACHT PARTY, it had to be good...right?  Here is the basic plot from the Troma website:

Terror crashes a private yacht party when one by one the not, busty party girls are butchered by a mysterious killer. Who will survive the KILLER YACHT PARTY? Starring Kate Luyben (TRUE BLOOD).
Well, while the movie was good overall, it just wasn't as great as I was expecting it to me.  Of course, with the picture of the girl covered in blood on the front of the DVD, I was expecting one big bloodbath of a film...and a bloodbath it was not.    Now to be fair, this was built more like a murder mystery film more than a horror film, although it seems to be being marketed more towards the horror crowd.   For a horror film, it is a little lacking in fact that the few kills that are actually shown are done very quickly and with cut aways, leaving us mainly just to see the aftermath of the kills...and most of them are very tame in the gore department.  I'm sure this has to do with being a low budget film, but I feel they filmmakers could have used just a few more gore effects to amp up the horror.

The acting is actually very good for a film like this.  Most every character gives a great performance and as a mystery, the film does an amazing job of setting up all the main characters to create numerous possibilities of who the killer could be.  Almost every character is set up with a minor flaw or grudge that gives you a reason to think that they are the person responsible for the killings.  Because of this, the film was a success overall.  I honestly could not figure out who the killer was in this film, unlike most every other film in this genre where the killer is pretty obvious by the end of the movie.  This one surprised me, so for that I applaud the filmmakers.

So....while hardcore horror fans will be disappointed by the lack of violence and gore, those viewers that like a good murder mystery will want to check this one out for sure.