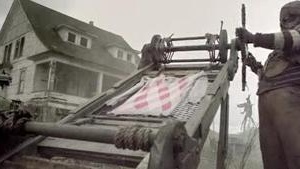 Thanks to my buddy Caleb for alerting me about what he found while browsing the website, theawesomer.com.   We all know Rob  Zombie from his days as a musician with his band White Zombie and his solo stuff...and more recently he has been known for his film making, with such credits as HOUSE OF 1000 CORPSES, THE DEVIL'S REJECTS, and the HALLOWEEN remake and sequel.  Well, now he is throwing his talents into the realm of....directing commercials?  Well....that could be interesting...but what kind of product could he advertise that would stay true to his horror roots?  A commercial for a Halloween store would make sense...or maybe even or a retail store such as Hot Topic (where they sell his wife's clothing line) or maybe for power tools like chainsaws or something.  Well, his first commercial is for nothing like that...it is, in fact, a commercial for Woolite Laundry Detergent!

Even with something as innocent as Woolite Laundry Detergent, Rob Zombie creates a commercial full of his signature style and mood.   Check this out now!