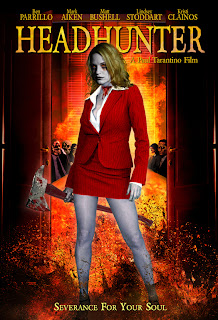 
I have to give serious props to writer/director Paul Tarantino for this film. HEADHUNTER has a distinct Sam Raimi feel to it, which is one of the many reasons I enjoyed it immensely. I do have to admit that I was a little skittish about it at first, having never heard of this film nor being too impressed by the trailer. But I’m happy to report that HEADHUNTER deserves an A+ in all categories.
If you’re not familiar with HEADHUNTER, here is the synopsis, courtesy of the film's official website:
BEN CARUSO (BEN PARRILLO “A BETTER WAY TO DIE” “KILLING EMMETT YOUNG”) wants to improve his life. When DOUG BENNET, a high rolling client of Ben’s (MARK AIKEN “SHE CREATURE” “ALIAS”), offers to put Ben in touch with a top drawer corporate Headhunter, Ben thinks that all his troubles have been solved when in fact…they’re just starting.

Ben meets the strikingly beautiful SARAH TIERNEY. As a corporate headhunter, Sarah delivers Ben a high paying job that’s only draw back is that it’s the night shift. Ben finds Sarah odd, a bit cold and quirky, but with a seductive edge that he cannot deny. Soon the two consummate their attraction and from that point on, Ben is no longer simply working at a job, instead Ben is about to discover he has just become slave to an ancient curse.
During his night shift hours, Ben discovers he’s not alone in the vast and eerie office building. Instead, the office is haunted with the many tormented souls who have fell victim to Sarah’s charms. Sarah Tierney herself is more than just a little cold – she’s been dead for ten years. Having been murdered by a past lover who hacked her head off with an axe. Each year, on the anniversary of her death, she comes back as a ghost to hire a new charge to find her head, or die trying.

HEADHUNTER brings a unique story into the horror genre and gives plenty of scares and gore to go along with it. The story flows smoothly along and keeps the viewer engaged the whole time; there are no drag-points or slow areas to muddle things up. In short: it clocks in perfectly at 90 minutes long.
The camerawork is done well and the soundtrack creates a distinct and eerie atmosphere. In fact, the soundtrack is part of what gives HEADHUNTER it’s Raimi-esque feel. I could definitely see it as a throwback tribute to the 80’s horror jaunts.
Also, the acting is top-notch, with Benjamin John Parrillo and Kristi Clainos heading up an excellent cast. And finally, the gore is stellar, with my sole complaint being there just isn’t enough of it. One of my favorite scene involves a car smashing a guy to death against a wall. There are a couple of really nice beheadings, too...which is fitting, given the title of the film.
One of my favorite aspects of this film is the twist at the end. I can honestly say: I NEVER saw it coming. And it’s not a hokey, last-minute twist either. It’s one that catches you completely by surprise and gives you that “oh wow” sensation.
HEADHUNTER is a well-crafted horror flick that is definitely worthy of my DVD collection. It will keep you guessing, right up to the end. Just be sure and watch all the way through the credits...there’s a nice tidbit at the end of those as well.