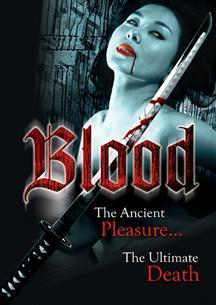 First off, let me start by saying that I have never been a huge fan of the Vampire sub-genre of horror films.  I guess I was always more of a zombie kind of guy.   Those romantic vampire movies of late have not helped my opinion of vampire films in any way, that's for sure.  But..things are starting to change.  With last year's LET ME IN  ( a remake of the 2008 Swedish film LET THE RIGHT ONE IN), and now this film, the Japanese film BLOOD, I just might be on track to becoming a vampire fan after all!  Here is the plot of BLOOD from the Well Go USA website:

Police Detective Hoshino (Kanji Tsuda) investigates the murder of a maid at a mansion belonging to Miyako Rozmberk (Sugimoto), a seductive vampire mistress and "cougar" all in one. Ukyo Kuronuma (Jun Kaname), an Edo-era swordsman who was turned into a vampire by Miyako is fingered for the crime but before anything can be done about it Hoshino ends up under Miyako's spell as well. This leads Hoshino and Ukyo to battle one another for the privilege of staying with Miyako for eternity.

The Cinematography in this movie is spectacular.  That is not something I really notice with most films, so when I do notice, I know that there is something special about it.  The camera work is amazing with some really cool camera shots and angles.

One of the main things I liked about this film was the use of color.  As stated before, the film opens with a sword fight in the snow.  This occurs at night and when blood is spilled, it is a bright red contrast against the otherwise dark blue and black colors that dominate the scene.  I noticed this a few times throughout the movie.  They blood really stands out against the muted background colors.

I thoroughly enjoyed BLOOD and highly recommend it.  If you've seen it already, leave a comment and let me know what you thought of the film!