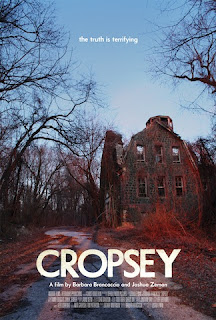 A few nights ago I watched one of the best documentaries I have ever seen.  That might seem like a bold statement, but that is no exaggeration.  The film is called CROPSEY,  a documentary about the legend of an escaped mental patient on Staten Island that kidnapped kids and killed them back in the 1980's.  Here is the official plot from the Breaking Glass Pictures website:


Growing up on Staten Island, filmmakers Joshua Zeman and Barbara Brancaccio had often heard the legend of ‘Cropsey.’ For the kids in their neighborhood, Cropsey was the escaped mental patient who lived in the old, abandoned Willowbrook Mental Institution and would come out at night to snatch children off the streets. Later as teenagers, the filmmakers assumed Cropsey was just an urban legend: a cautionary tale used to keep them out of those abandoned buildings. That all changed in the summer of 1987 when 12-year-old Jennifer Schweiger disappeared from their community.
Now as adults, Joshua and Barbara have returned to Staten Island to create "CROPSEY", a feature documentary that delves into the mystery behind Jennifer and four additional missing children.  The film also investigates Andre Rand, the real-life boogeyman linked to their disappearances.  Embarking on a mysterious journey into the underbelly of their forgotten bouough, these filmmakers uncover a reality that is more terrifying than any urban legend.
Let me start off by saying that I am a huge fan of True Crime stories and movies.  I have seen a lot of documentaries about serial killers but this one is by far my new favorite.  This film is as good as the PARADISE LOST  films  (The documentaries about the West Memphis 3...it you haven't seen these, they are a must watch!), if not even better.

The filmmakers do an excellent job giving you the back story on the alleged killer, Andre Rand, as well as the history of Staten Island.   The film is full of old, original news footage, both newspaper and news video clips of the Rand case.

The old Willowbrook Mental Hospital is the centerpiece here, and we get some back story on it as well.  They even show us a clip from an old expose on the Hospital (while it was still in use) by a then unknown Geraldo Rivera!  The filmmakers spared no expense in covering every aspect of this legend and more specifically, the Hospital itself.  They take the cameras with into the now abandoned Hospital and down into the tunnels underneath the Hospital, which connected all the different buildings on the Hospital's campus.  This is very creepy, especially after seeing the scenes of what happened in this Hospital years ago. Almost everyone originally involved with this case is interviewed for this film.  It was very interesting to see the original news footage and see the people back then and then see them present day and hear them talk about this case with such detail.  This case obviously effected these people and you can tell it is something they will never forget.    The filmmakers even get candid interviews with the the parents of almost all the victims.  This is very chilling to see how these folks are effected by this tragedy so many years later.  Interviews with Andre Rands friends and even his own sister are very interesting as well.  All that is missing is an interview with Rand himself, which the filmmakers tried very hard to get as we see.

Part horror, part suspense, and part drama, this film has something for everyone.  Was Andre Rand actually the 'Cropsey' all the kids told stories about?  Or was Rand just an easy target who was set up by the real killer........meaning the real killer is still out there among us?  We may never know.