Book Review: "The Complete History of THE RETURN OF THE LIVING DEAD" by Christian Selelrs and Gary Smart 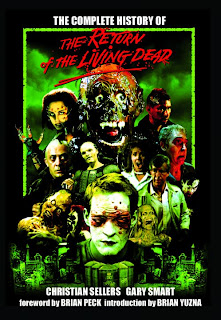 I recently read the book, THE COMPLETE HISTORY OF THE RETURN OF THE LIVING DEAD by Christian Sellers and Gary Smart.  Actually, I must confess...I haven't read all of it yet.  It will take me months to get through all of the info in this book, but I have read enough to know that is this by far the best book about a horror film or franchise I have ever read!  The book is published by Plexus Publishing (www.plexusbooks.com) and is a must have for all you Horror fans.  Here is the basic description of the book from the Plexus Publishing website:

An aficionado’s delight, The Return of the Living Dead is still one of the most influential zombie franchises of all time, spawning such modern splatter classics as 28 Days Later and Zombieland. Now more popular than ever, the films boast a loyal following of diehard enthusiasts. For the first time in 25 years, the cast and crew of all five films in the cult horror-comedy franchise reveal their secrets from behind the scenes, telling of life on set as well as the feuds, legal battles and sackings that plagued the makers. Featuring hundreds of previously unseen photos and exclusive artwork, this unique, eye-catching history is the ultimate celebration of the Return franchise and all those who contributed to its creation.
This book is a large size paperback, clocking in at 288 pages and contains over 500 photos from the ROTLD franchise. And these aren't just your regular press photos...this book is packed with rare, behind the scenes photos.  One thing I found particularly interesting was the concept art and sketches of some of the zombies seen in the films. I loved the sketches of Tarman...one of my favorite film zombies of all time!  Other photos include rarely seen storyboards and pics of publicity items for them films.

The book mainly focuses on the first film in the franchise (and the best film, of course), in fact, almost half the book is dedicated to the classic original film.  The book does go on to cover parts 2 and 3, and then even dedicates a chapter each to part 4  (Necropolis) and part 5 (Rave to the Grave).   The authors have spared no expense here, and obviously spent numerous hours doing research and interviews for this book.   Almost every main actor from every ROTLD film is interviewed in the book along with most all the cast and crews from the films, including John Russo, Tom Savini, James Karen, and Linnea Quigley just to name a few.

There are some great stories in this book, some of which are very humorous, but there are some that are not as funny, as we read about battles between actors and directors and the replacement of the original make-up/effects guy (William Munns) due to him and director Dan O'Bannon not seeing eye to eye on all the effects.  The book tells of O'Bannon having to step in and fix some of the effects himself, making him very critical of Munns and eventually leading to his replacement by Make-up specialist Tony Gardner.

This is just one tiny example of the behind the scenes stories you will read about in this book.  I love books about horror films like this one, and this is by far my favorite of them all.

The book is currently available from Amazon.com for under $20.  This is a steal for a book this nice full of such great photos and info on one of the greatest horror films ever made  (in my opinion).  Do yourself a favor and pick up a copy of this book today!!

Labels: Books, The Return of the Living Dead