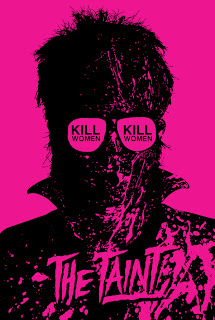 THE TAINT
Directed by:  Drew Bolduc and Dan Nelson
Written by:  Drew Buldoc

I just had the experience of watching THE TAINT, and I am pretty sure it is one I will not soon forget.    You truly do experience this film, not just watch it.  That is very rare with movies these days, but this movie is beyond anything I have seen in a long time.  This is not your cookie cutter little Horror film.  This film punches you square in the face and makes you pay attention!  For those not familiar with this film, here is the basic plot from imdb.com:

The water is tainted. The Taint poisons the minds of men. It turns them into raging misogynists: monsters who want nothing more than to crush women's heads with rocks (or other objects). When society is transformed into a land of sadistic violence and horrible brutality, it is up to Phil O'Ginny and his hot friend, Misandra, to combat the horrible evil that is The Taint. Can they survive a world brimming with castration and endless head crushing?!

So let me get my few minor complaints out of the way...the plot is a little hard to follow or even find at some points in this film and the acting is pretty bad in some scenes.  There...that's out of the way. None of that really matters anyway in this film....now on to the good stuff.

More than anything, THE TAINT has some of the best gore effects I have ever seen in any film.  From independent to huge Hollywood films, this movie outdoes them all.  As stated in the plot summary above, the film involves a tainted water supply that turns men into raging, women hating lunatics.  All they do is try to rape women and/or just bash their heads in...usually by the use of a large rock.  And as much as I want to forget it....I have to mention that the men do this all while their (obviously prosthetic) manhood hangs out of their pants.  What can I say...this movie is messed up!!  Anyway..all this head bashing provides some spectacular gore effects.  Some were so good in fact, that I cringed and even backed the DVD up to watch again..trying to see where it was cut from the real actress to the dummy that actually gets its head crushed, and I never did see a cut.  One minute a woman would be talking and then the next second her had is getting smashed in a car door or with a rock. The scenes are flawless.  I honestly have no clue how the filmmakers did this. The filmmakers also use what looks to be 100% practical effects.  If any CGI was used, it was used so perfectly that you couldn't tell.  Co-Director Dan Nelson, along with prop makers Chris Bolduc and Billy Davis are to be commended on such excellent work here.  Nicotero and Savini might be the masters of effects, but these three guys from THE TAINT are putting themselves right in line to take over that throne!

These effects were so realistic that I was actually uncomfortable at times.  It reminded me of being a kid and watching those old FACES OF DEATH movies that we all thought were real back then.   I remember the feeling you got thinking what you saw was real.  THE TAINT took me back to my younger days by giving me those exact same feelings.   Kudos to the filmmakers for that achievement!

THE TAINT is destined to become one of those films everyone eventually hears about but a lot of people are scared to see.  It is an instant cult classic that would be perfect for midnight showings at your local seedy theater.  Also worth mentioning are the dream sequences which to me were very reminiscent of something David Lynch would have done.

Crude, rude, ridiculous, gross, uncomfortable, vile, and disgusting are just a few words that can truly describe this film...and I loved every minute of it!

***NOTE*** HAYES HUDSON'S HOUSE OF HORROR does not condone violence towards women in any way...whether having drunk from tainted water supply or not.