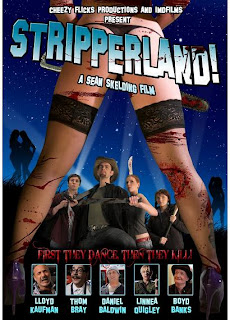 "First They Dance, Then They Kill!"

I just watched the latest flick from Cheezy Flicks Entertainment, and if there is one word that can sum up this film, it is F-U-N!   STRIPPERLAND is a take off of ZOMBIELAND except instead of just people turning into zombies, well now some virus or something is causing just women to turn into zombies...and strippers.   Here is the official plot from the Cheezy Flicks website:

In a world where women have turned into exhibitionist man-eaters, a small band of survivors must make their way to the safety of the West Coast. Along the way, they encounter hordes of ravenous half-dressed strippers. Will they survive, or be eaten alive by millions of pole dancing zombies?

As stated above, the film is an obvious spin off or spoof of the film ZOMBIELAND, a film most Horror fans should be familiar with.  The film has many similarities, in that a dorky kid meets up with a cool dude and meets up with 2 girls along the way.  They all work together to fight off the hordes of zombie strippers...or stripper zombies.

Ben Sheppard plays the dorky role of Idaho and plays it well.  He is one of the better of the actors in this film in my opinion and has some of the funniest lines.  He has his set of rules for dealing with stripper zombies, and they are popped up on screen for you to see, just like they were in ZOMBIELAND.

Along with the obvious comedy in the film, STRIPPERLAND has a great amount of gore in it.  Tons of shotgun blasts the guts and heads of the stripper zombies and blood flying everywhere!  My only complaint was the most all the blood/gore was CGI instead of practical effects, but I understand the necessity of it, especially on a low budget film such as this (imdb lists the estimated budget at $500,000).

The film also includes a lot of notable cameos from some of Horror's most famous icons, including scream queen Linnea Quigley, Troma's head honcho Lloyd Kaufman, and a great cameo from Boyd Banks (Dawn of the Dead remake, Land of the Dead, Diary of the Dead) as a pimp, one of the funniest scenes in the film in my opinion. Also, I have to mention that one of the infamous Baldwin brothers (Daniel) makes an appearance here as rapper named Double D.  And just as an F.Y.I...his rapping skills are about as good as his acting skills....maybe even worse! HA!

Daniel Baldwin rapping aside, this is a great movie that I thoroughly enjoyed.  The film had a funny ending that set it up perfectly for a sequel.   I would recommend this film for all you who like a little comedy with their Horror, and a little zombie with their strippers...or vice versa. 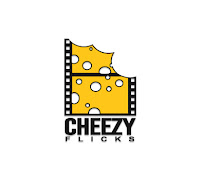