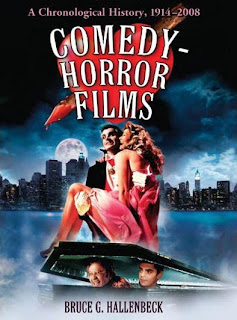 I have been reading a lot of Horror movie books lately, and the latest one I completed is the great book, COMEDY-HORROR FILMS: A CHRONOLOGICAL HISTORY 1914-2008 by Bruce G. Hallenbeck from McFarland Publishers (www.mcfarlandpub.com/). This book is a great reference to have and covers every well known and not so well known film in the Horror/Comedy genre, up through 2008.

The book is broken up into chapters by decades, starting with the Silent films of the Teens and Twenties, up through the new millennium of Horror/Comedy films. Hallenbeck writes is a very easy to read style. Each film discussed has tons of entertaining facts about it. The basic plot for each film is discussed, of course, but then "highlights" of each film are pointed out and quotes and sample dialog from the films is given. Hallenbeck also discusses actors and actresses from each film, and gives you some background on them. You will also get some behind the scenes details from some films and some fun facts and trivia bits about the films. Each films gets about 2-3 pages of discussion therefore is a great book to pick up and read off and on when you just have a little time to kill. Some movies get a little more coverage but most stick to the 2-3 page format. Throughout the book, you will also find numerous photos, from production stills to pictures of classic movie posters.

This is a great book, and it was fun to read about some of my all time favorite films, like RE-ANIMATOR, CEMETERY MAN, and RETURN OF THE LIVING DEAD. While one might not think about these as films that belong in the Horror/Comedy genre, Hallenbeck points out numerous instances of comedy (albeit, dark comedy) splattered throughout each film. You will, of course, also read about the more commonly thought of Horror/Comedy titles such as the classic Abbott and Costello films to the more modern Horror/Comedy films such as SHAUN OF THE DEAD, BUBBA HO-TEP, and the SCARY MOVIE films.

I highly recommend this book for any fan of Horror films, specifically of this variety.

You can call McFarland's toll free order line at 1-800-253-2187 to purchase this book or order directly from McFarland's website by CLICKING HERE.
Posted by ZOMBIE HAYES at 8:56 PM