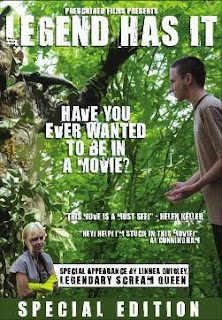 LEGEND HAS IT is from the great folks at Prescribed Films and they seem to know just what it takes to make a fun Horror movie, even if it is on what looks to be little or no budget. The film was written and directed by Insane Mike Saunders with Jason Bolinger as co-director. Here is the basic plot of the film from imdb.com:

Ever wonder what it is like to be trapped in a horror movie? If you were to ask Al Cunningham, he'd tell you it's not all fame and fortune. Instead it's blood and death at the hands of a man-eating plant monster. Will they survive? Will they make it to the end of the movie? Will they figure out where the music is coming from? See the movie that breaks down the 4th wall like never before.
This film might be a little hard to explain, but I will do my best. As Al and his friends get ready to go on a camping trip, Al realizes that something isn't right. He hears creepy music and doesn't remember anything from the day before. He realizes that he is merely a character in a Horror movie, and spends the rest of the film trying to figure out how to get out of the film. This movies was obviously made by Horror movie fans, as they throw every cliche and Horror movie staple at the audience. The movie is full of good, creepy music and some great special effects and gore. The "plant monster" mentioned in the plot above isn't that great, but that is really a small part of this film. The majority of this film is the fun that comes from Al and his interaction with the viewing audience. The plot says it's "the movie that breaks down the 4th wall like never before" and they mean it! Al speaks directly at the camera in many instances, looking to the audience for help escaping the movie! Rich McNinch played the part of Al and gave a very likable performance. I need to also mention the addition of legendary scream queen Linnea Quigley in the role of Al's mom. She is a great actress and always brings something positive to any film she is in.
And before I forget, I have to mention the great "Thriller" inspired dance number at the end. Very funny.
Overall this movie is a great film. It is a silly, Horror/comedy that doesn't take itself too seriously and was made by Horror fans for Horror fans. Movies are meant to be fun and entertaining and LEGEND HAS IT nailed it.
CLICK HERE to watch the trailer

CLICK HERE to visit the official website of Prescribed Films and to purchase the DVD
Posted by ZOMBIE HAYES at 8:48 PM