Check out the trailer for the French Horror film, HIGH LANE (aka. VERTIGE) 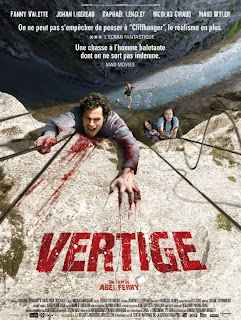 Check out this trailer for the French film HIGH LANE. Formally known as VERTIGE, this film was part of FAB Fest 2010, the film fest hosted by FAB Press. Here is the basic plot from the FAB Press website:

Having drawn comparisons to a host of action and horror favourites including The Descent, Deliverance, The Texas Chain Saw Massacre and Wrong Turn, FAB Fest is delighted to be screening the UK premiere of this new French survivalist horror film. A group of adventurous friends heads into the wilderness seeking thrills in the hills, but they soon encounter much more than they bargained for as the dangers of scaling cliffs and crossing dizzyingly high rope bridges are soon overshadowed by the much more lethal attentions of a homicidal killer.
Watch the trailer and then left me know what you think. I think this looks really good and I hope they get a U.S. distributor.
CLICK HERE to watch the trailer.
Posted by ZOMBIE HAYES at 7:01 AM