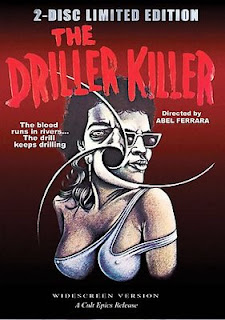 I had heard of the movie THE DRILLER KILLER for a while, but never had seen it. I finally got to watch it last night, and I am glad to say it was worth the wait and didn't disappoint. THE DRILLER KILLER was directed by and stars Abel Ferrara and is released in this awesome 2-disc Limited Edition by Cult Epics. Here is the basic plot summery from the Cult Epics website:

Long available in incomplete or full screen editions, Abel Ferrara's 1979 cult classic THE DRILLER KILLER here receives its definitive presentation, accompanied by three of the director's never-previously-released short films from the 1970s. THE DRILLER KILLER stars Ferrara himself (under the pseudonym 'Jimmy Laine') as Reno Miller, an artist being driven mad by the pressures of New York life who takes to the streets and begins murdering derelicts with a power drill. Although Ferrara intended to make a film in the tradition of THE TEXAS CHAINSAW MASSACRE, the end result bore an even greater resemblance to Martin Scorsese's TAXI DRIVER. THE DRILLER KILLER is an indispensable addition to the collection of anyone interested in 1970s horror, the work of Abel Ferrara, or off-the-wall cinema.

The movie starts out a little slow, but it is important that it shows this regular guy and his struggles in keeping up with an apartment in New York on a starving artist's income. He is working on his "masterpiece" that he knows will bring huge money from his art dealer, but while he is still working on it, the bills are piling up. It is interesting to watch as Reno's life just gets worse and worse little by little. You can see the stress of life building up in Reno. His girlfriend leaves him and then his art dealer basically calls his latest work of art rubbish. Also, he is way behind on his sleep because a local punk rock band has just moved into his apartment building and they practice at all hours of the night. Reno can't handle all the negatives in his life, and he finally snaps. Reno sees a commercial for a Port-o-pack which lets you use your power tools on the go with a portable battery device. He immediately gets a twisted idea in his head and heads to the local hardware store.

The acting in this film is very good. Reno is very believable and the grungy, gritty look of the film adds to the realism. This is a great example of something you would have seen on 42nd street back in the day of seedy theaters and exploitation films.

The gore effects in this film are very realistic and done extremely well. A drill to the forehead in one scene is especially amazing for a film shot in the late 70's. I am still not exactly sure how they did this, and it called for a rewind in order to figure it out. I kept looking for the cut shot to where they switched to the dummy head, but I never saw it. I don't know how they made it look that realistic, but they did. Very impressive.

This 2-disc edition is packed with special features, including a disc full of early short films from the star and director.