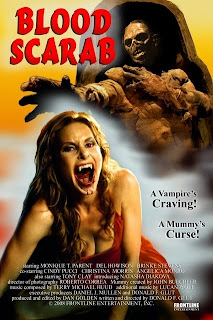 BLOOD SCARAB is another film from writer/director Donald F. Glut and Frontline Entertainment. Here is the basic plot from the Frontline DVD:

To exit in daylight, Elizabeth Bathroy, the infamous Blood Countess and widow of legendary vampire Count Dracula, makes a blood pact with an Egyptian goddess that involves three lovely victimes and a living Mummy! A centuries old craving collides with an ancient curse in this horrific climax to Frontline Entertainment's COUNTESS DRACULA and MUMMY'S KISS series.
As with most all of Mr. Gluts films, expect some sub-par acting, and lot of naked women. Expect some cheesy special effects and some silly plot lines. But, you can also expect to be entertained, as I have been with all of the Frontline Entertainment films I have seen. And isn't that what a movie is supposed to do? So on that merit alone, this film is a success. Although, I must say the mixing of the Mummy story and the Vampire story is a little far fetched and actually quite confusing at times!

Something else to expect from these films, is a sense of humor throughout the film. The film doesn't take itself seriously and neither should you. Instead, just have fun with it and enjoy the ride! One of the funniest scenes in this film is when Count Dracula's servant, Renfield, watches his master burn up, after not making it into the castle before the sun came up. All that's left of the Count is a small pile of ashes, which Renfield quickly cleans up with a small broom and dustpan!
Overall this is a fun film. If you enjoyed other Frontline Entertainment releases, you will love this one too.
CLICK HERE to watch the trailer
CLICK HERE to purchase the DVD
CLICK HERE to visit the official website of Frontline Entertainment
Posted by ZOMBIE HAYES at 9:29 PM