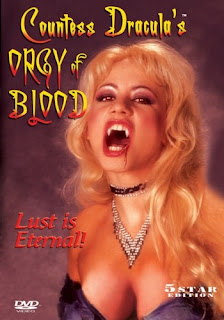 When lusty female vampires descend upon a 19th century village and begin sinking their teeth into the citizens, fearless Father Jacinto (Paul Naschy) attempts to put an end to the terror by driving a stake through the heart of head bloodsucker Lord Ruthven. When Dracula himself appears in modern-day Los Angeles to stake his claim on this city, the dark prince is enraged to discover that Father Jacinto's actions have prevented him from sucking the blood directly from his victims. Only through the resurrection of Lord Ruthven and his deadly assistant Diana will Dracula be able to drink the blood he needs to survive, and it isn't long before a mysterious figure from the past attempts to thwart his nefarious plans.
First off, it is important to note that this film marks Spanish Horror icon Paul Naschy's American film debut! I have always been a big fan of Mr. Naschy, so seeing him in this film was a pleasant treat, and he brings a sense of Horror credibility to this otherwise low budget soft core Vampire flick. Now, that is not a knock on this film at all, it just is what it is. And as most people know, films written and directed by Mr. Glut are full of beautiful females in various stages of undress. Usually the final stage, which is wearing nothing at all...but I digress.
If you are offended by female nudity, stay away from the film. If you don't mind it (i.e. every man in America) then check the this film out. I have watched some pretty good Vampire movies lately, and I can add this one to the list.
The film has a nice Gothic Vampire vibe to it. The acting (as in most of Mr. Glut's films) is surprisingly good. Not what you would expect from this type of film. Paul Naschy had a great performance, but I was really impressed with Arthur Roberts, who plays Lord Ruthven. He played a very believable and creepy Vampire. One fun thing about this film is when Lord Ruthven is awakened from his hundreds of years of slumber. He is amazed at such modern day things such as a light switch which provides some comedy in the film. Also, watching the Vampire Diana walk along a modern day inner city street, in her century years old clothing, and coming in contact with some modern day prostitutes was amusing as well.
I need to also mention the special effects and gore effects. John Carl Buechler and his effects team did a wonderful job with the Vampire death sequences, as they slowly withered away to leave nothing behind but skeletal remains.
The DVD itself is loaded with tons of great special features, including: Behind the Scenes Footage, an Alternate Ending, Actress Auditions and Interviews, Original trailers, Bloopers and Outtakes, and much more! I highly recommend you check out the Bloopers, as it is fun to watch a Vampire who's fang just won't stay in and is was a rare treat to see the great Paul Naschy as he fumbles with a prop weapon that just won't cooperate!
Overall this film is a lot of fun, which is what a movie should be. I recommend it for any fans of the Vampire genre.
CLICK HERE to purchase the DVD
CLICK HERE to visit the official website of Frontline Entertainment
Posted by ZOMBIE HAYES at 2:25 PM