Do you want to help produce a zombie film? Check out ROSE-3D! 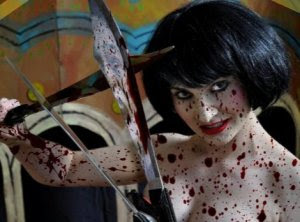 Check out this awesome premise for a zombie film....It is called ROSE-3D and here is the plot synopsis from the official website:

It's Pee-Wees Playhouse meets Night of the Living Dead in this whimsical, savage 3D horror-comedy featuring zombies, puppets, and musical mayhem. 48 hours into the undead apocalypse, one woman has managed to stay on the air. She's a hot ex-mental patient with a message of hope, a baseball bat, and her puppet friends. Welcome to "Rose's Place": where the songs, skits, and rescue stations run all night long or at least until the zombies get in.
The film is written and directed by popular Horror author John Skipp. According to the official website, the film is 1/3 of the way financed. This is where you come in! You can donate to the film in 4 different subscription levels, Silver ($1000) , Gold ($2500) , Platinum ($5000), and Diamond ($10,000). Each subscription offers the chance at a monetary return and the Diamond subscription even offers a percent of the profits over a period of time. So, for those of you with some extra money laying around, invest it in the coolest way I can think of, by helping finance a zombie film! All subscribers of every level will get their name in credits of the film! Hey Graduates.....add up all that graduation gift money and help finance this film!
CLICK HERE to visit the official website