Watch the trailer and then help support the great film: THE SKY HAS FALLEN 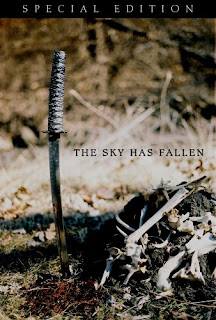 THE SKY HAS FALLEN is an independent feature film written, directed, and edited by Doug Roos. Here is the basic plot synopsis from the films Kickstarter.com page:

In a post-apocalyptic world, a new disease wipes out almost all of mankind within a couple hours. Trying to avoid infection, people flee to remote locations, but they start seeing mysterious black figures, carrying away the dead and experimenting on them. Now, Lance and Rachel, two survivors determined to fight back, must kill the leader of these creatures before the rest of humanity disappears.

This film has already been circulating around the festival circuit, and has already won some awards! The filmmakers are now looking to get funding to add some additional scenes to the film and to help pay for the cost of printing the dvd's of the finished version. They are also looking for funding to pay for full page ads in Fangoria and Rue Morgue magazines, advertise online via Facebook and Google Ads, taking the movie around to independent theaters across the country, and to promote the film at Horror conventions and more film festivals.

To get this extra funding, the filmmakers are using the great site, Kickstarter.com. For those unfamiliar with that site, it is a place people can post their projects to, and then people can look over all the projects and pledge money to whichever project they like the best. Each project has a monetary goal set for it, and a day limit in which the goal must be met. If the total of the goal is not met by the deadline, no money is collected from the pledges. If the project does get 100% of it's goal by the deadline, then the money is collected from all those that pledged.

There are many levels of pledges you can do for this project. You can pledge as little as $1 all the way up to the full goal level! With each pledge level you will get something cool in return. For instance, for just a $1 or more, you will get access to behind the scenes news and photos and your name on a special "Thank You" section of the films official website. If you pledge $6,000 or more and the goal is met, then you will get everything in the lower pledge levels, plus a cameo in the film as a dead body with airfare and lodging paid! Other gifts from other levels include signed scripts and posters, t-shirts, and even wardrobe pieces!

Go watch the trailer and then visit the Kickstarter page and help support this great film!

CLICK HERE to watch the trailer
CLICK HERE to visit the Kickstarter page and make a pledge!
Posted by ZOMBIE HAYES at 12:04 PM