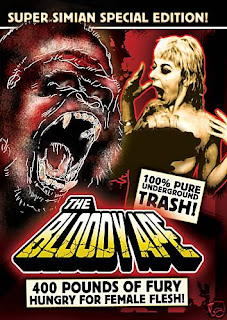 Sometimes I wish I would have been born about 20 years sooner than I was. I missed out on the whole drive in/grindhouse movie experience. Luckily, we have films like THE BLOODY APE to remind us what those times were like and let us younger folks take part in the grindhouse experience, all in the comfort of our own home! No sticky floors and shady characters to deal with...well, in most homes anyway.
Here is the basics plot synopsis from Wild Eye Releasing:
THE BLOODY APE is the most outrageous, drive-in movie take on Poe's "Murders in the Rue Morgue" ever committed to film. A carnival barker foolishly releases his 400 pound gorilla, who then literally goes bananas on a rampage of raw rape and boffo butchery - leaving the low rent population of Long Island either sexually violated, slaughtered - or both! From maverick indy filmmaker Keith J. Crocker (Blitzkrieg: Escape from Stalag 69), THE BLOODY APE is a gore-soaked love letter to the sex and violence of the grind house movie era that pulls no punches and offers no apologies for wallowing in a skin-drenched stew of crudeness and camp! Banned from numerous festivals around the world, ignored by critics and loathed by the politically correct....but now there just is no stopping THE BLOODY APE!
As stated above, THE BLOODY APE is a tribute to the grindhouse flicks from the 60's and 70's and looks like it definitely belongs in that era. The film was shot entirely on Super 8 and looks very cheap and grainy, all intentional of course. The acting in the film is ok. There are some moments of major over-acting in some spots by some actors, but I think this was also intentional, as the old grindhouse and drive-in films were known to have less than stellar acting.
The movie doesn't take itself seriously at all, so you shouldn't either. Don't watch this film if you are looking for a truly good cinematic experience. That is not what this movie is or wants to be. But if you are wanting a movie you can watch with a group of friends and have a good time and a good laugh, the THE BLOODY APE is your film.
CLICK HERE to watch the trailer (WARNING: Not safe for work! Trailer contains nudity and bloody Ape mayhem!)
CLICK HERE to purchase the DVD

CLICK HERE to visit the official website of Wild Eye Releasing
Posted by ZOMBIE HAYES at 7:09 AM